Together We Are A Force Participation Award Winner: #expandthenarrative Campaign

Diversity consultant Bam Mendiola started working with the Washington Trails Association (WTA) in November and the American Hiking Society (AHS) in April to share more diverse stories through both organizations’ social media pages. Together, they highlighted the stories of outdoor leaders such as Vasu Sojitra, an adaptive skier and athlete for The North Face, and CJ Goulding, the lead organizer for the Children and Nature Network’s Natural Leaders Network. Mendiola trained WTA and AHS staff on how to facilitate a constructive and DEI-focused social media conversation, thus shifting that responsibility from the featured outdoorists to the sponsoring organizations. Combined, the two organizations’ campaigns have made over 420,000 impressions so far. 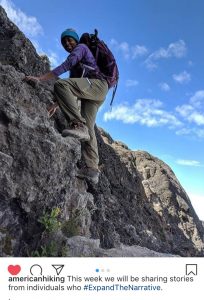 “The #expandthenarrative campaign has been, for me, a celebration of communities whose stories have been systemically undertold,” Mendiola says. “The #expandthenarrative campaign is also a reminder to myself and others that people of color have been leaders in the natural world since time immemorial. And for me, my relationship to the outdoors is a reclamation of the rich relationship that my ancestors had with the outdoors and with the more-than-human world.”

THE INSPIRATION BEHIND THE CAMPAIGN

Mendiola, who identifies as gender nonbinary and uses the pronouns they/them/theirs, was inspired to start the campaign after climbing Mt. Rainier, which is known as Tahoma or Tacoma to the Puyallup and Salishan-speaking people of western Washington.*

The night before the climb, Mendiola felt anxious, realizing they would be carrying the burden of climbing the mountain as someone who doesn’t fit the mold of a cisgender, heterosexual, white, male outdoorist.

“I knew I would be carrying two packs: the 35-lb backpack on my own body and a heavier, invisible backpack that I’m constantly wearing as a person of color outdoors,” Mendiola says. “I felt like I had to be twice as good, twice as fast, twice as strong of a climber to overcompensate for the stereotypes that I have to survive about communities that I belong to.

Mendiola hopes to make this invisible backpack lighter for future generations of outdoorists.

*Mendiola makes an effort to acknowledge Native American names for places in the United States, which is a growing trend to pay respect to the original stewards of public land.

Visit whose.land or native-land.ca to see an interactive map of historical boundaries of tribal nations in North America, Australia, New Zealand, and parts of South America.

As the outdoor industry continues to work on growing participation and diversifying the people shown recreating outdoors, Mendiola says reciprocity will be the key to success. Instead of asking marginalized communities for their help in improving and moving the outdoor industry forward, outdoor companies and individuals should also look inward and first ask how they, themselves, can do the internal work necessary to avoid causing harm in this space. Before asking people to invest emotional labor, Mendiola says brands seeking that guidance should have a plan for what they can offer in return.

Trust needs to be earned, Mendiola says, adding that the outdoor industry is seeking answers from marginalized or underrepresented communities but not reciprocating.

It’s important for the outdoor industry to recognize that marginalized and minority communities carry centuries of historical trauma. When we ask those groups to educate us through conversations about equity and inclusion in the outdoors, we are asking them to revisit those traumas and, maybe, to re-open wounds. “It takes a lot of emotional labor to be able to hold this space,” says Mendiola, who encourages the industry to cede the facilitation of DEI conversations to the targeted communities.

Before asking people to invest emotional labor, Mendiola says brands seeking that guidance should have a plan for what they can offer in return.

What made the #expandthenarrative campaign stand out among applications for the Together We Are a Force award in Participation was how truly diverse its stories were, says Lise Aangeenbrug, executive director of the Outdoor Foundation. It elevated voices that haven’t been heard from in previous work, she said, and focused on what the outdoors meant to each individual. Aangeenbrug says she hopes people see possibility in the campaign. 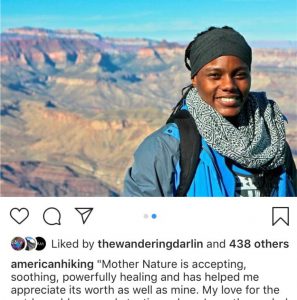 Having diversity in the types of stories told shouldn’t be overlooked, Mendiola says. We often romanticize struggle, which can be detrimental to eliminating prejudice in our society. When we read about people who have overcome racism, sexism, bias against ability, and more, Mendiola says it sends a message that it’s not urgent to solve those systemic problems. That’s why it was important to Mendiola that #expandthenarrative stories weren’t all about struggle.

“I’m constantly learning what equitable storytelling looks like,” Mendiola says. “A lot of the times when institutions ask us for our stories, they’re asking for stories exclusively of resilience. Everybody loves a hero’s journey. Everybody loves to hear how a hero went through a struggle and then overcame it and then came out better at the end. We love a story with a happy ending, and our version of a happy ending is always where a hero or a person went through something difficult and became wiser, better, faster for it. 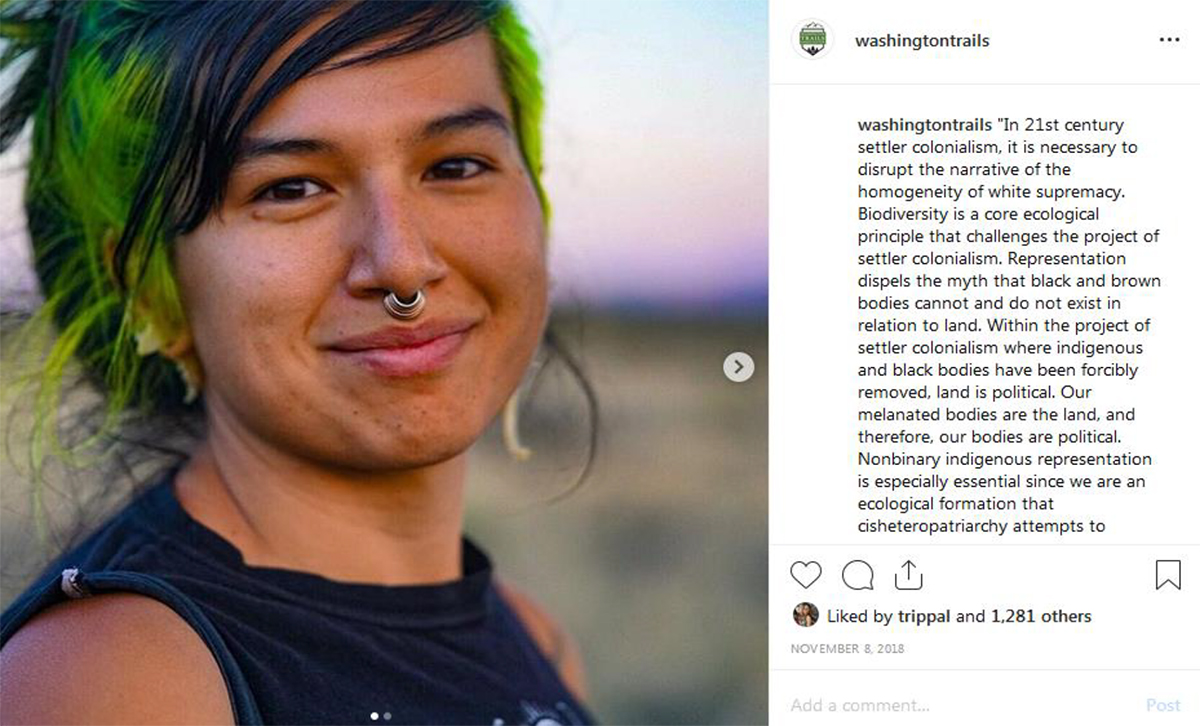 I think there’s danger in telling only that narrative. I think that one of the reasons why we tend to only center resilient stories is because it absolves the rest of us of our responsibility to dismantle those systems of oppression… I think it’s really important that we ask ourselves how diverse the stories are that are being told. If we’re only hearing resilience stories, if we’re only hearing stories that reinforce the ‘benefits’ of these systems of oppression, I think that those stories are incomplete.”

So what does the ultimate inclusive outdoor community look like? Mendiola says it’s not for them to say. Rather, they say the industry should be asking the most marginalized members of the community.