What happens when a brand sets out to make a difference instead of making profit? These Swedish denim brand executives think they can save the environment and protect public lands simply by getting people to change their pants. You read that right.

Combined, Lantz and Haglund have decades of experience in the outdoor and fashion industries. Haglund spent eight years as the marketing director for Helle, a Norwegian knife company, and Lantz has worked for Wrangler, H&M, and Cross Jeans. 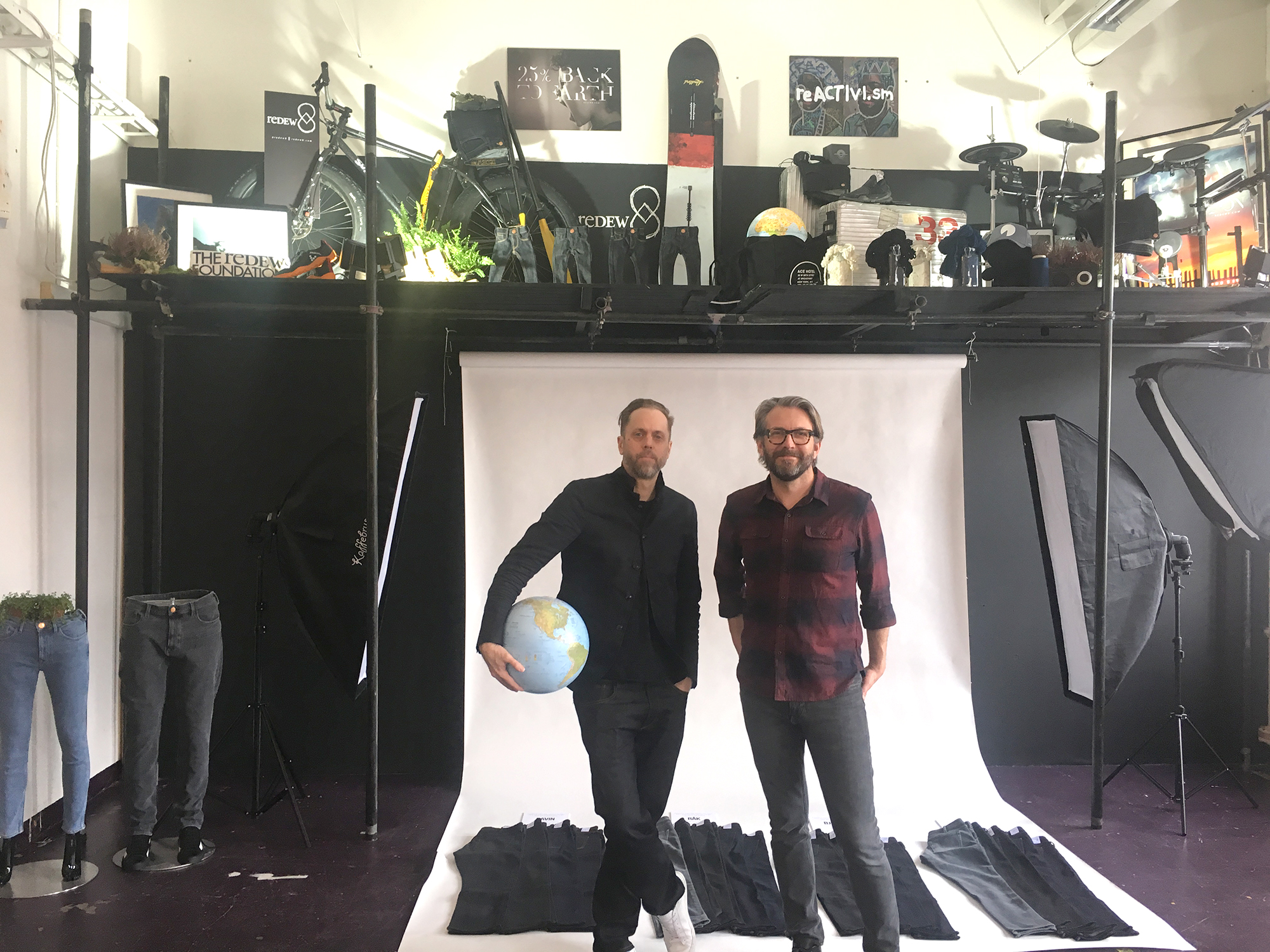 The two executives are shaking up the denim world with zero-cotton jeans, an ultra-transparent business strategy, and a generous profit share with environmental charities that directly and indirectly benefit public land and wildlife conservation. Inspired by the concept of “Freedom to Roam,” the visionaries see a connection between the products we make and buy and the land on which we use them.

reDEW jeans are made quite a bit differently from your standard fare denim. For starters, they’re made of organic cotton and have 360-degree stretch. The form fit means they retain their shape even after days of wear, so you don’t have to wash them to bring them back to their old glory. Polyester fibers in the fabric are 100-percent recycled, and all-copper buttons and rivets are recyclable, unlike those on average jeans which are made of multiple materials and can’t be recycled as easily, if at all. Finally, reDEW uses stay colors and an invisible “paint” they developed in-house to strengthen the fabric rather than weaken it through stone-washing to create worn effects. If you want a worn-in look on your reDEWs, you’ll have to work for it yourself. This avoids scarring the Earth by extracting pumice, and it saves massive amounts of water by avoiding unnecessary wash cycles during the production and dyeing processes.

Soon, reDEW will share its secrets through Open Book, which they hope will persuade the entire denim industry to steal their more eco-friendly processes.

“The more people that can do it, the better,” Lantz says. “We only have one planet. [If major brands used our techniques], we would be very happy. Very, very happy.”

PUTTING THEIR WORK IN CONTEXT:

The fashion industry is one of the dirtiest in the world, in no small part because of denim. If you care about the potential harmful impacts of your clothing on the outdoor places you recreate (i.e. public lands), you should scrutinize your entire wardrobe, starting with your jeans.

A single pair of jeans takes hundreds if not thousands of gallons of water to produce, from growing the cotton to dyeing the fabric, washing out the color, and washing it again after it’s been pounded with stones to get that broken-in feel and worn appearance. Haglund and Lantz want their brand to be the Tesla of jeans, ultimately sharing all of their secrets with the world so their methods can be reproduced and clean up the whole denim industry for the better. 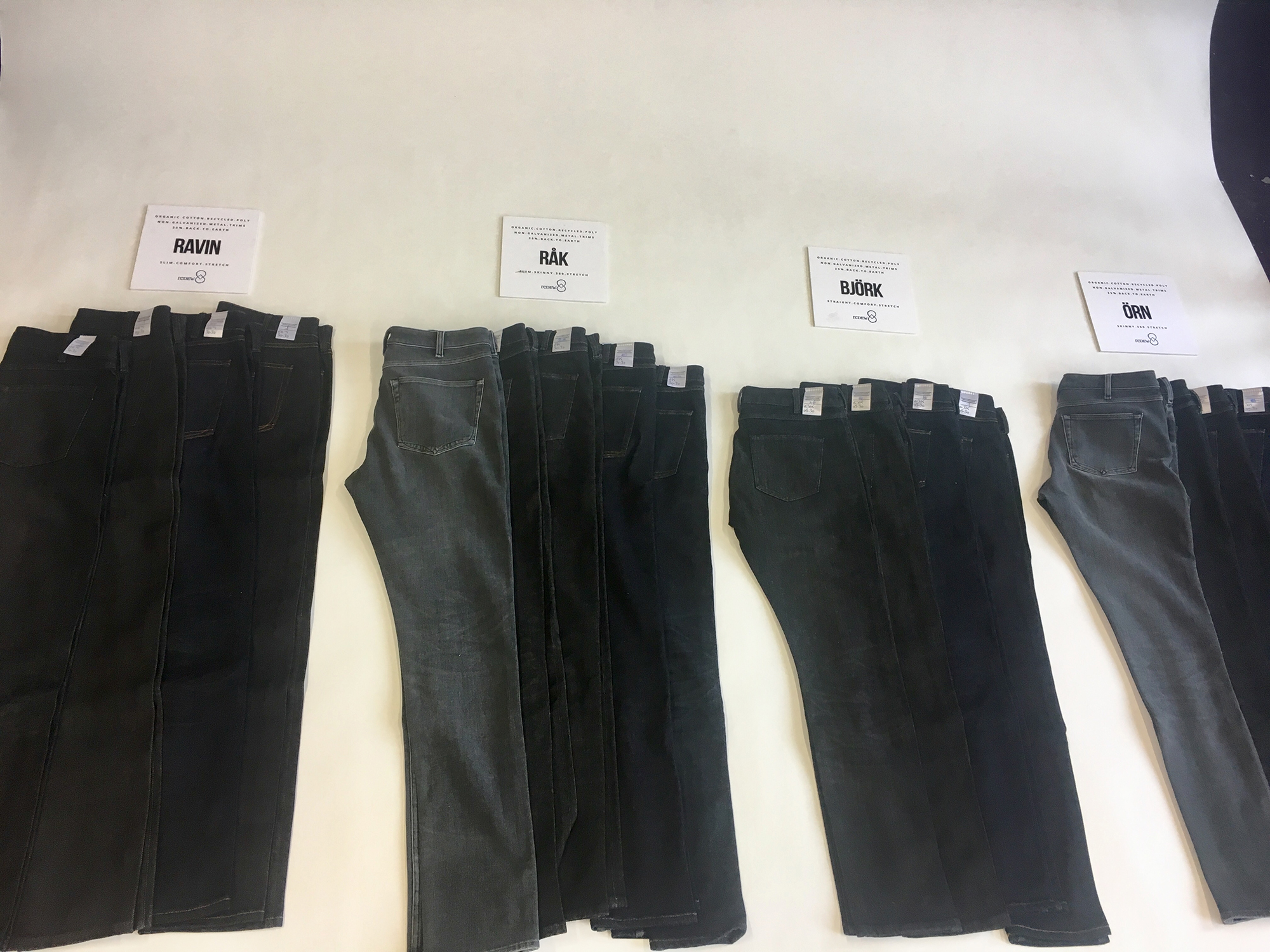 A single pair of jeans takes hundreds if not thousands of gallons of water to produce, from growing the cotton to dyeing the fabric, washing out the color, and washing it again after it’s been pounded with stones to get that broken-in feel and worn appearance. Haglund and Lantz want their brand to be the Tesla of jeans, ultimately sharing all of their secrets with the world so their methods can be reproduced and clean up the whole denim industry for the better.

reDEW’s Zero Cotton jeans, which are expected to debut this year, will be made from a blend of viscose from aspen, pine, and birch wood. It feels nearly identical to the cotton jeans reDEW already makes—if you didn’t already know it wasn’t cotton before feeling it, you wouldn’t figure it out on your own.

Nearly 25 percent of pesticides are used in cotton production, Haglund says, and an immeasurable amount of water. “Forests grow where forests grow,” Lantz says, without being watered by anything other than rain. More forests can and should be planted, he says—and the world would be better off if many cotton fields were replaced by trees.

Outdoor ideals are as woven into the fabric of their jeans as they are into Swedish culture.

“In Sweden, we have the right to put up a tent anywhere,” Haglund says—including on private property, so long as you can’t see the house and you don’t stay longer than three days.

You’re not going to wear reDEW jeans to backpack in snowy northern Sweden, or to climb Everest, or to run a marathon. Lantz and Haglund aren’t trying to pass them off that way. But they do think it’s important to make it easier for people to consider themselves to be outdoorsy, to connect to nature on a deeper level. You don’t have to do a 10-day trek with dehydrated food and sleeping pads two inches off the ground to experience nature, Haglund says.

“There’s a movement in Sweden encouraging people” to go outside, Lantz says. “Don’t stay at home and watch TV tonight. Take the family, make a barbecue somewhere, and stay out.”

The more connected we are to nature, the better equipped we’ll be to protect it.

Most companies set out to make money. Not reDEW. They set out to make change, with high-quality jeans as their tool. “We’re creatures of habit,” Lantz says. They can’t push people toward making different decisions about the clothes they wear if there are no alternatives that are at least as good as what they’re already wearing, if not better. It’s hard to change customers’ buying habits, they say, but it’s much easier if you give the customer a no-brainer choice to make. If you can buy a pair of jeans that fits better, feels better, looks better, performs better, and is better for the environment, why wouldn’t you?
Haglund and Lantz want to prove that jeans can be done better not just to create a good product they can sell, but to change how all denim manufacturers produce jeans. The jeans you’re likely wearing right now are hiding quite a few dirty secrets. For starters, look at the color and wash. Jeans all start out with essentially the same deep indigo color. To get a lighter shade, they’re washed again and again until much of that dye comes out. They’re pounded with pumice stones, which is its own extractive industry you’ve likely never thought of. “Stone-washed” denim is spun in massive industrial washing machines with piles of pumice, which break apart as they pound the fabric.

Through Open Book, reDew wants to empower consumers to see the full picture and make the best possible choices for the environment. If there’s a tradeoff—more energy for less water saved, for example, or durability versus decomposability—customers should know that. Open Book will make public information about their carbon footprint, how much water they use, where their supplies come from, and what it takes to make a pair of jeans and get them to the market.

ON FUNDING AND DONATING:

When Haglund and Lantz built the company, they included a provision to ensure reDEW will always give away 25 percent of its profits through the reDEW Foundation’s reDEW Earth Prize. “Twenty-five percent changes who wants to work with us and who wants to invest,” Anders says—and it limits their options as a startup. “People who think first and only about money don’t want to come on board.”

Ultimately, it means they’ll grow more slowly. And that’s OK with them—they plan to take their time growing in the right way, fully evaluating every decision along the way. “It gave us investors that work for us and believe in us,” Lantz says.

There’s currently no Nobel Prize for sustainability work, so they’re trying to fill that hole with the Earth Prize. They want it to become as prestigious as the Nobel. The reDEW community can nominate organizations to win the prize.

“We’re creating knowledge, not just raising money,” Haglund says. Last year, the foundation donated about $28,000 to Painted Dog Conservation, which helps save these wild dogs from poaching, raising awareness of the dogs’s plight all the while.

THE TRAILBLAZERS’ CALL TO ACTION:

Every business that focuses on money first leaves something negative behind for the children of the future, they say.

“We’re taking something from them every time we focus on financial decisions,” Haglund says. “And we have to change that. We have to care more about this [the planet] than we care about you. That’s the way we change.”